which product is right for me

What is the Importance of Iron?

Most of us know that iron is an extremely useful naturally occurring mineral and is one of the most abundant and widely used metals on Earth. In fact, it is a building block upon which modern society was built. However, many of us do not fully understand the importance of iron in our bodies. Just as iron is used in architecture and manufacturing, it is also an essential building block within our bodies and without it we would not be able to survive and thrive. Hemoglobin is in part comprised of iron and is vital to our survival. Hemoglobin binds oxygen molecules in our lungs and then distributes oxygen throughout our bodies to our internal organs via red blood cells. Oxygen rich hemoglobin gives the blood its characteristic red colour, while deoxygenated hemoglobin has a blue colour. Without enough iron, the human body is unable to sustain sufficient levels of oxygen, and health deterioration occurs. Iron is not only used to form hemoglobin, but also myoglobin, which, found in muscle and cytochromes, are the main components of the respiratory oxidation chain (how energy is created using oxygen). Low levels of iron decrease the body’s natural ability to produce these proteins. Red blood cell functions diminish to the point of inadequacy. Iron is also involved in neural development, namely in myelin sheath formation. It is not an exaggeration to say that iron is utilized throughout our entire bodies, and is absolutely necessary for good health and survival. Even though iron is one the most common minerals on the planet, iron deficiency is the most prevalent nutritional deficiency. Some of this is due to the mechanism of iron absorption.
which product is right for me Heme form found in meat and fish and which is readily absorbed. Non-heme form found in cereals, beans and spinach and of which less is absorbed Only small quantities of iron are absorbed in the small intestine at a time, and non-heme iron needs to be transformed into its ferrous form and bound to a transporter to pass from the gut into the bloodstream. Once in the bloodstream, iron is used in the bone marrow to make hemoglobin and the excess iron is stored as ferritin primarily in the liver and some in the spleen. Every individual’s body varies in its needs. Those with increased iron needs may include children and teens experiencing growth spurts, adolescents, pregnant women, vegetarians and menstruating girls and women .
Fefol company If you are concerned about your iron levels, speak with your doctor. You may be prescribed an iron supplement if your dietary intake is insufficient. A simple blood test will tell your doctor whether or not you need to supplement your iron intake, and the strength of tablet you may require in order to increase and maintain a healthy iron level.There are different forms of iron which your doctor may prescribe. Some types of iron supplements have been associated with gastrointestinal side effects. Certain types or formulations may be better suited for you such as a spansule capsule, and may be more compatible with the way your body metabolizes such supplements . 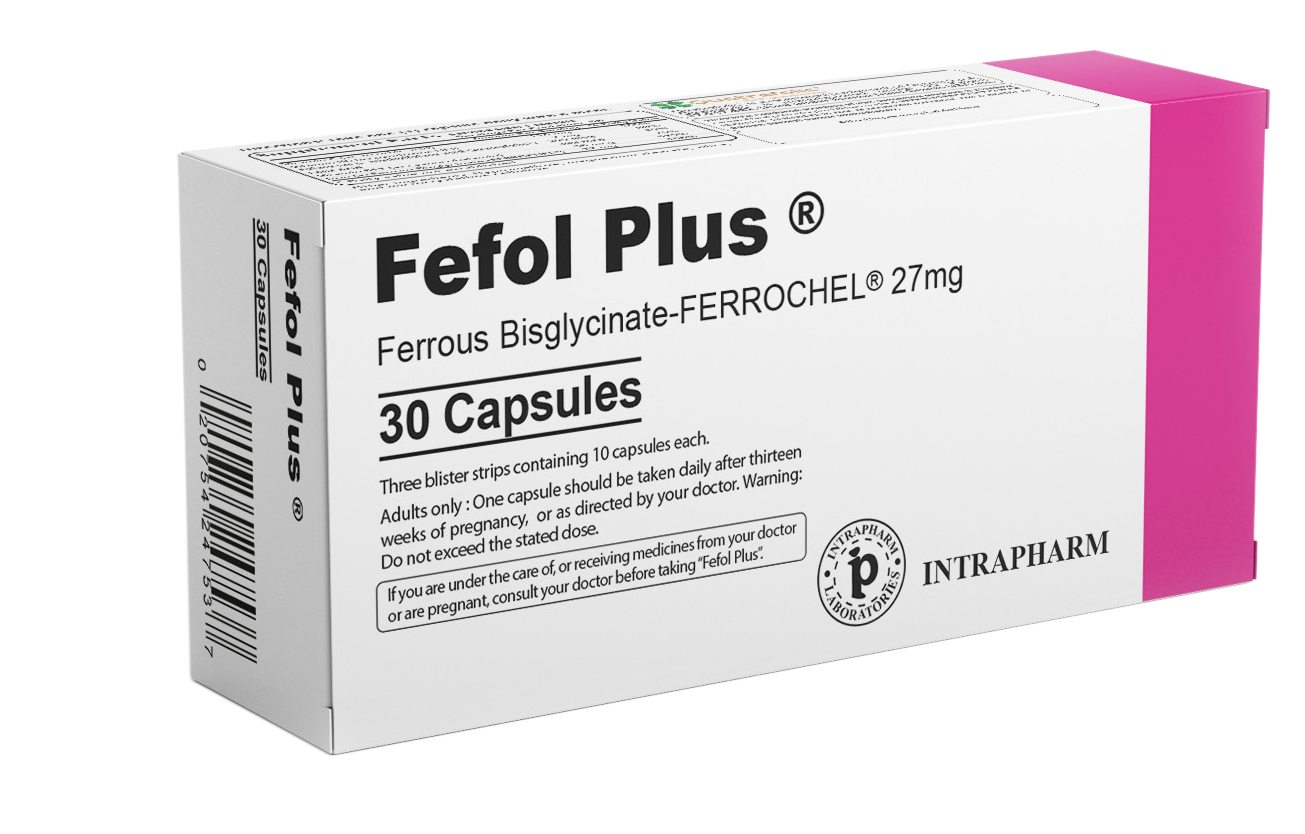 FEFOL® is an excellent source of iron in spansule form , and works with your body to correct low iron levels. Instances of stomach upset , constipation, and nausea are dramatically reduced in those who . If you are concerned about your iron levels , be sure to ask your doctor about this, an iron supplement that has proven efficacy with fewer side effects .
Fefol Plus

What is Iron Deficiency Anemia ?

Iron Deficiency Anemia Iron deficiency anemia can be defined as a reduction in the number of hemoglobin carrying red blood cells in the body due to a lack of iron. A number of factors contribute to and exacerbate the effects of iron deficiency, but it is ultimately a result of the body utilizing more iron than it is provided.

Some of the common causes of iron deficiency include :

·         The presence of certain diseases or disorders

Iron is a building block of hemoglobin, and a vital component of our body’s natural oxygen delivery system. Hemoglobin is an oxygen-binding protein found within red blood cells, and is responsible for the collection of oxygen molecules from the lungs for delivery throughout the body .

Maintaining good oxygenation requires iron to make
hemoglobin, folic acid and B12 to make red blood cells , healthy lungs to allow
oxygen exchange, and a healthy heart to pump the red blood cells where they
need to go. A problem with any of these components will lead to a reduction in
oxygen levels in the body. In the case of iron deficiency, this will lead to a
reduction in hemoglobin levels which the body will try to compensate for by
increasing the heart and respiratory rate .

Iron deficiency leads to a lack of oxygen within our vital

The condition varies in severity according to the level of
deficiency. Those who are chronically deficient develop iron deficiency anemia,
a dangerous and possibly fatal condition especially in the presence of a
cardiac, respiratory or other underlying problem .

If you are concerned about being iron deficient , it is imperative to get medical treatment as soon as possible. Your doctor may

prescribe a combination of dietary adjustments and iron supplements such FEFOL® or FEFOL
PLUS® which is proven to provide patients with symptom relief
with low instances of side effects .

All kind of fefol is available in non-prescription form at your pharmacy. Ask your physician or pharmacist about
the benefits of iron supplementation and the best course of action for your
treatment .